Wi-Fi 6, originally known as 802.11ax, is an expansion of 802.11ac, which is now called Wi-Fi 5. Are you confused yet? Okay, let’s start by defining how the Wi-Fi Alliance is redefining and more importantly renaming the last twenty years of Wi-Fi naming conventions.

The Wi-Fi Alliance is international organization that define the specifications for the various different wireless standards. They create rules and define how different pieces of wireless equipment can talk to one another so manufacturers can make wireless devices that all speak to one another.

Thus, over the years not everyone has conformed to all the standards and that’s why in years past you had to purchase only Netgear MIMO wireless equipment to work with Netgear routers (or insert any other brand that didn’t want to conform to published standards).

The Wi-Fi Alliance has decided that naming each standard based on their specification policy name within the IEEE’s standards policies was confusing to consumers. So they have decided to rename the new standard from 802.11ax to Wi-Fi 6 and retroactively rename all the previous standards at the same time.

So this is a little confusing but essentially both the a and b specification of 802.11 were adopted at the same time. The 802.11a amendment allows for higher speeds and more channel selection but it cost significantly more than 802.11b did back in 1999. 802.11a was the first user of the nice and empty 5.7 GHz band. 802.11b was the first user of the HIGHLY congested 2.4 GHz band (which has held all wireless development back for years).

Both the a and b standards were available to manufactures in 1999 and the b standard was much less expensive to produce, that was the primary standard for years (and the first to market in 1999). 802.11b works at a maximum speed of 11 Mbit/s and had only 3 independent channels (there are 11 total, but all but 3 overlap one another….this is still true today if you are on a 2.4 GHz wireless network).

802.11a works at a maximum speed of 54 Mbit/s and has 12 independent channels (none of which overlap). 802.11a is obviously the superior standard, thus why the Wi-Fi Alliance rebranded it as Wi-Fi 2 even though it was not an evolution of Wi-Fi 1.

For any wireless nerds (like me) the IEEE 802 is the standards dealing with Local and Metropolitan networks. the .11 is the eleventh defined standard which deals with wireless communications. Every amendment to the standard is given a new letter. Initially the first wireless specification to be standardized was 802.11a, the second was 802.11b. After a dozen years of this the IEEE ran out of characters and switched to two character standards with 802.11ac (much like Excel when you pass column Z and the next one is AA). The current standards have defined specifications up through 802.11ay (which is a 60 GHz wave spectrum system).

Wi-Fi 6 is just like all previous versions of 802.11x wireless networks in regards to backwards standard compatibility. You will be able to use your 802.11ac (Wi-Fi 5) or previous wireless devices on the new network at the reduced performance level they operate at. Wi-Fi 6 does a better job as isolating older equipment on your wireless network so you will not see as much degradation of your bandwidth using older wireless devices like you have seen in previous versions.

There are only a few routers out that conform to 802.11ax. The Netgear AX8 is probably the best consumer model on the market that we have setup for a client. Expect other brands to start releasing 802.11ax / Wi-Fi 6 routers over the rest of 2019. If you need to replace your router you may as well upgrade to Wi-Fi 6 today since all new wireless equipment will be based on the standard soon.

If you would like to upgrade to Wi-Fi 6 or have any issues with your wireless network and would like to have a professional computer service company consult with you and set it up for you, call us at 1-800-620-5285.  Karls Technology is a nationwide computer service company with offices in many major cities.  This blog post is brought to you from our staff at the Aurora Computer Repair Service, if you need computer repair in Aurora, CO please call the local office at (720) 441-6460.

THE IMPORTANCE of a FIREWALL

While antivirus software is an essential component of an effective protection against viruses and malicious content lurking in the web, it is not sufficient on its own! Antivirus technology uses inherent heuristic methods to detect quarantine and delete identified threats. However, no operating system is ever completely immune and impervious to a cyber attack. A second line of defense, in addition to antivirus software, can significantly reinforce an individual’s or a company’s network security: A FIREWALL!

Firewalls protect the perimeter of a network by monitoring and filtering all network traffic – desired and undesired. Once unwanted traffic has been identified, they create barriers to thwart potential attackers and malicious programs, thereby shielding the network from unauthorized access. Furthermore, users can configure their firewall’s security settings to accommodate their personal/corporate privacy needs. Excessively restrictive settings may prohibit a user’s internet access entirely. Finding the right balance is the key: Amplify your/your company’s network security while maximizing your own/your employee’s productivity!

Without a firewall, potential attackers can easily identify your computer as a vulnerable victim, surreptitiously enter your network and compromise the system’s security. Don’t make yourself an easy target for cyber threats! If you need help installing a firewall or advice to determine what firewall program is right for you just call KARLS TECHNOLOGY computer repair. Let our experienced engineers outfit your system with the best firewall and antivirus programs.

THE BEST PROTECTION against computer security issues IS PREVENTION! 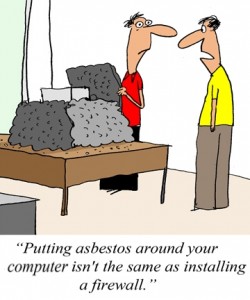