The FBI Moneypak Virus is a very disturbing type of malware also referred to as ‘scareware’ or ‘ransomware’, as hackers distribute this virus with the purpose of scaring their targets into paying a ransom for a crime they never actually committed. This virus may enter a computer system through malicious downloads, email attachments and software update pop-ups. Once a system is infected the virus restricts access to the computer and directs its unsuspecting victims to a very realistic-looking, but fraudulent FBI screen detailing an alert message: The ‘FBI’ accuses the user of illegal, criminal activity (such as cyber-theft of copyrighted material) as a result of which the ‘FBI’ has seized and frozen access to the computer. The message includes very detailed instructions on how you can pay the fine within a specified time frame and also displays information regarding potential penalties and/or jail time as a consequence of payment refusal. In many scenarios, the virus controls a user’s web camera, shows an image of the user on the screen and claims to record the IP address. With these abominable scare tactics the cyber-criminal tries to convince his victims to pay for the “crimes” they allegedly committed.

The FBI virus infects critical system files and if the infection has progressed far enough (unfortunately, this is often the case) the virus may have achieved the ability to disable antivirus removal software. To make matters worse, hackers are constantly evolving and modifying this root kit to strengthen its resistance. There are several different variants of the FBI computer virus. Therefore, screen appearance, claims, notifications and warnings may vary.

An infected computer system may show the following screen: 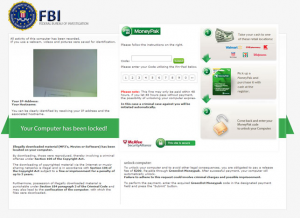 DO NOT allow cybercriminals and their scare tactics to frighten you or force you to pay!

Karls Technology can and will successfully remove the FBI VIRUS from your computer system!!!